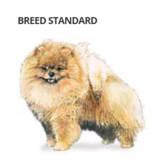 In 2019 The American Pomeranian Club Board voted to provide a clarification on trimming to all AKC Judges approved to judge the Pomeranian.
Click Here To View Trimming Guideline

GENERAL APPEARANCE
The Pomeranian is a compact, short-backed, active toy dog of Nordic descent. The double coat consists of a short dense undercoat with a profuse harsh-textured longer outer coat. The heavily plumed tail is one of the characteristics of the breed. It is set high and lies flat on the back. He is alert in character, exhibits intelligence in expression, is buoyant in deportment, and inquisitive by nature. The Pomeranian is cocky, commanding, and animated as he gaits. He is sound in composition and action.

SIZE, PROPORTION, SUBSTANCE
Weight – is from3 to 7 pounds with the ideal weight for show specimens being 4 to 6 pounds. Any dog over or under the limits is objectionable; however, overall quality should be favored over size. Proportion – The Pomeranian is a square breed with a short back. The ratio of body length to height at the withers being 1 to 1. These proportions are measured from the prosternum to the point of buttocks, and from the highest point of the withers to the ground. Substance – Sturdy, medium-boned.

HEAD
Head – in balance with the body, when viewed from above, broad at the back tapering to the nose to form a wedge. Expression – may be referred to as fox-like, denoting his alert and intelligent nature. Eyes – dark, bright, medium sized, and almond shaped; set well into the skull with the width between the eyes balancing the other facial features. Eye rims are black, except self-colored in chocolate, beaver and blue. Ears – small, mounted high and carried erect. Proper ear set should be favored over size. Skull – closed, slightly round but not domed. Stop – well pronounced. Muzzle – rather short, straight, free of lippiness, neither coarse nor snipey. Ratio of length of muzzle to skull is 1/3 to 2/3. Nose – pigment is black except self-colored in chocolate, beaver and blue. Bite – scissors, one tooth out of alignment is acceptable. Major Faults – Round, domed skull. Undershot, overshot or wry bite. Disqualification – Eye(s) light blue, blue marbled, blue flecked.

NECK, TOPLINE, BODY
Neck – set well into the shoulders with sufficient length to allow the head to be carried proud and high. Topline– level from withers to croup. Body – compact and well-ribbed. Chest – oval tapered extending to the point of elbows with a pronounced prosternum. Back – short-coupled, straight and strong. Loin – short with slight tuck-up. Croup is flat. Tail – heavily plumed, set high and lies flat and straight on the back. Major Fault – Low tail set.

FOREQUARTERS
Shoulders – well laid back. Shoulder blade and upper arm length are equal. Elbows – held close to the body and turn neither in nor out. Legs – when viewed from the front are moderately spaced, straight and parallel to each other, set well behind the forechest. Height from withers to elbows approximately equals height from ground to elbow. Shoulders and legs are moderately muscled. Pasterns –straight and strong. Feet– round, tight, appearing cat-like, well-arched, compact, and turn neither in nor out, standing well up on toes. Dewclaws– may be removed. Major Fault – Down in pasterns.

HINDQUARTERS
Hindquarters – angulation balances that of the forequarters. Buttocks are well behind the set of the tail. Thighs – moderately muscled. Upper thigh and lower leg length are equal. Stifles – strong, moderately bent and clearly defined. Legs – when viewed from the rear straight and parallel to each other. Hocks – when viewed from the side are perpendicular to the ground and strong. Feet –same as forequarters. Dewclaws– may be removed. Major Fault – Cowhocks, knees turning in or out or lack of soundness in legs or stifles.

COAT
The Pomeranian is a double-coated breed. The body should be well covered with a short, dense undercoat with long harsh-textured guard hair growing through, forming the longer abundant outer coat which stands off from the body. The coat should form a ruff around the neck, framing the head, extending over the shoulders and chest. Head and leg coat is tightly packed and shorter in length than that of the body. Forelegs are well-feathered. Thighs and hind legs are heavily coated to the hock forming a skirt. Tail is profusely covered with long, harsh spreading straight hair forming a plume. Females may not carry as thick or long a coat as a male. Puppy coat may be dense and shorter overall and may or may not show guard hair. A cotton type coat is undesirable in an adult. Coat should be in good and healthy condition especially the skirt, tail, and undercarriage. Trimming for neatness and a clean outline is permissible. Major Fault – soft, flat or open coat.

COLOR
All colors, patterns, and variations there-of are allowed and must be judged on an equal basis.

Major Fault – Distinct white on whole foot or on one or more whole feet (except white or parti) on any acceptable color or pattern.

Classifications –The Open Classes at specialty shows may be divided by color as follows: Open Red, Orange, Cream, and Sable; Open Black, Brown, and Blue; Open Any Other Color, Pattern, or Variation

GAIT
The Pomeranian’s movement has good reach in the forequarters and strong drive with the hindquarters, displaying efficient, ground covering movement that should never be viewed as ineffective or busy. Head carriage should remain high and proud with the overall outline maintained. Gait is smooth, free, balanced and brisk. When viewed from the front and rear while moving at a walk or slow trot the Pomeranian should double track, but as the speed increases the legs converge slightly towards a center line. The forelegs and hind legs are carried straight forward, with neither elbows nor stifles turned in nor out. The topline should remain firm and level with the overall balance maintained.

TEMPERAMENT
The Pomeranian is an extrovert, exhibiting great intelligence and a vivacious spirit, making him a great companion dog as well as a competitive show dog.

Even though a Toy dog, the Pomeranian must be subject to the same requirements of soundness and structure prescribed for all breeds, and any deviation from the ideal described in the standard should be penalized to the extent of the deviation.